When surfing the web for information on connecting relais to the parallel port I read that it was very easy to connect eight LEDs to the parallel port. I tried it and it worked. I didn't have a use for it at first. Later I discoverd a sort of vu-meter plug-in for Winamp that was quite nice, but it didn't work with XP because of some security issue so I had to put the LEDs aside once more. But then I found a Debian package that can show the CPU load on the LEDs! Wow, this was the first time I could actually do something useful with the LEDs. The package is called 'ledstats' and it depends on 'libparportled'. If you use Debian you can just install it by entering 'apt-get install ledstats' as root. If you use some other distribution I advise to google it.

The LEDs are connected to pin 2 to 9 (2 is the first LED, 9 is the last) with a 100 Ohm resistor (brown-black-brown) to the ground on pin 18 to 25 (just pick one). Don't forget to connect the LEDs the right way, the short pin or cathode to ground and the longer pin or anode to one of the eight data ports. 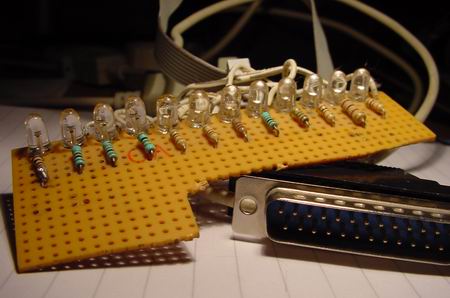 The LEDs & the LPT plug 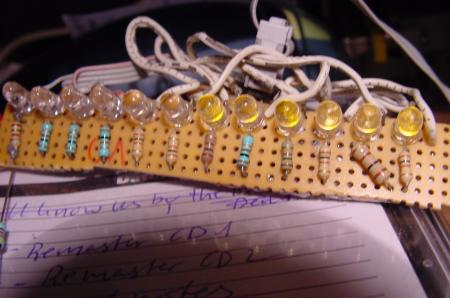 The LEDs in action, while starting XFree; hence the high CPU load